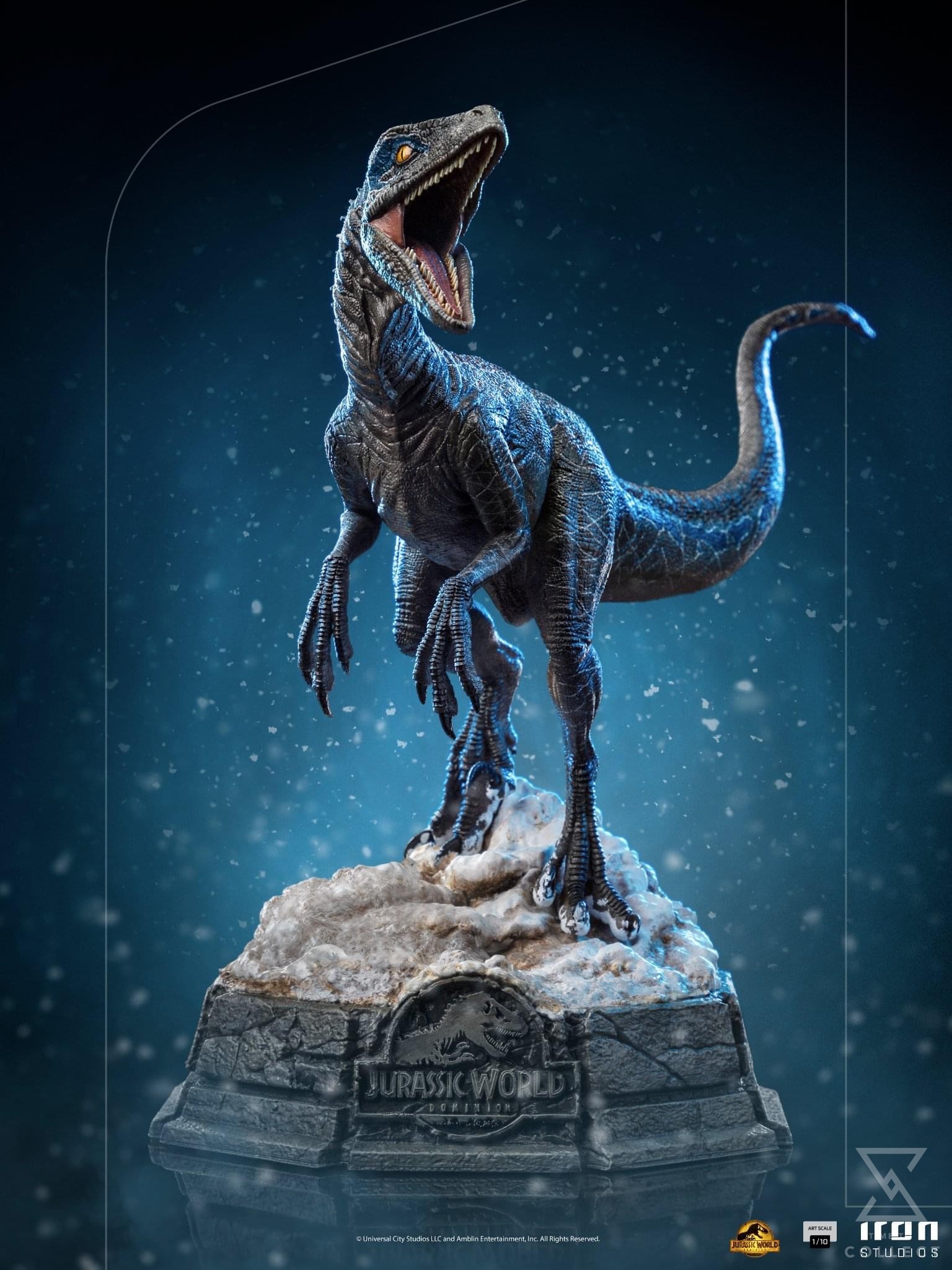 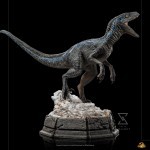 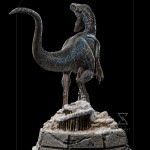 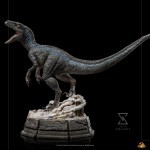 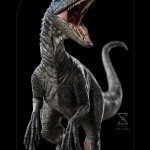 The only survivor from her pack, the female Velociraptor with blue-gray skin, marked with a characteristic blue strip that determined her name, keeps discovering a new world, and adapting to a new wild terrain with lower temperatures, roaring over a pedestal of dirt and trunks covered by snow with the movie’s logo on the front, sculpted in a stone mural that circles the pedestal. Thus, Iron Studios proudly present another release derivative from the Jurassic World trilogy’s awaited climax, with the statue ”Blue – Jurassic World: Dominion – Art Scale 1/10”, the Velociraptor most beloved by fans.

Created by InGen in a project to study the intelligence of the Velociraptors, train them, and possibly use them for military purposes, Blue and her sisters Charlie, Delta, and Echo were trained by Owen Grady, but due to the incident in Isla Nublar caused by a genetic hybrid super predator, created by InGen and called Indominus Rex, only Blue, the eldest, and most faithful on her flock to Owen survived and apparently became the only Velociraptor alive. Capable of expressing emotions, like affection, pain, and empathy, Blue reencountered her old trainer three years after the incident in an apparent rescue mission, in which Owen is betrayed by the mercenary team that accompanied him, and Blue is hurt, captured, and taken to the continent with other captive dinosaurs for an auction. After the escape of a second hybrid named Indoraptor, and the chaos caused by this event, the survivor Blue, and all of the other specimens escaped, which means that dinosaurs and humans shall coexist in a new world that will be presented in the next movie Jurassic World: Dominion, on its trailer, is revealed that Blue has a baby called Beta. Besides the movies, Blue made some special participation in the Netflix TV series ”Camp Cretaceous”.

Iron Studios also bring a Deluxe version in the statue ”Blue and Beta Deluxe – Jurassic World: Dominion – Art Scale 1/10”, with the female Velociraptor together with her small baby, with Blue roaring over a terrain covered by snow, also with the movie’s logo in the front, sculpted in a stone mural that circles the pedestal.

Thoroughly following the official references, Iron Studios bring Blue, revealed on the Inside Iron Studios Day, and already available for Pre-Order. A subtle preview of this release was presented in the form of a silhouette during the opening of the T-Rex Kingdom Pizza in the Jurassic Park Burger Restaurant in São Paulo, broadcasted in a special online presentation on Iron Studio’s YouTube channel. Check out the other releases ”Dennis Nedry meets the Dilophosaurus Deluxe – Jurassic Park – Art Scale 1/10”, ”Dilophosaurus – Jurassic World: Dominion – Art Scale 1/10” and ”Blue and Beta – Jurassic World: Dominion – MiniCo” preparing for the premiere of Jurassic World Dominion. 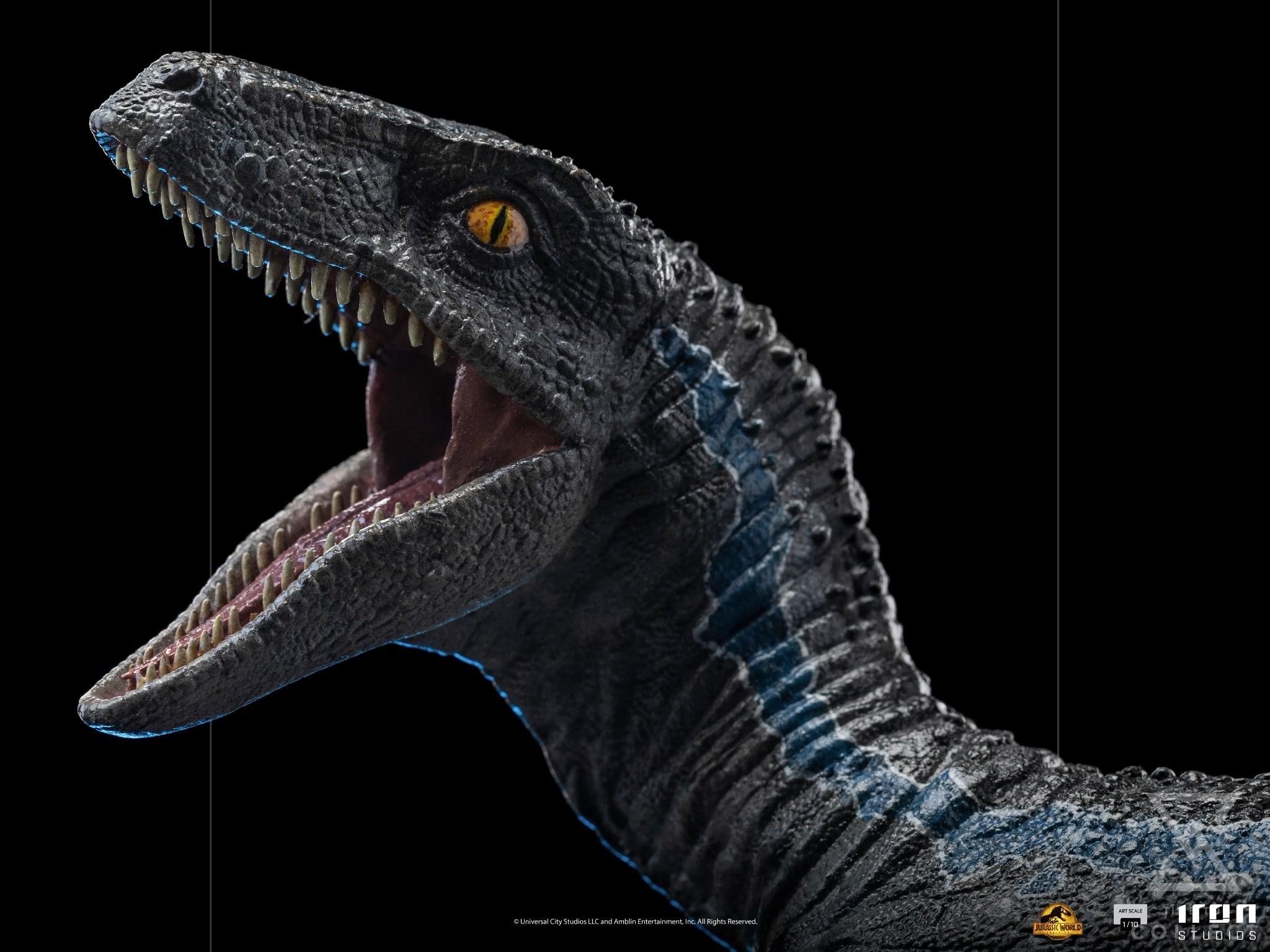