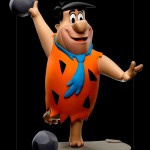 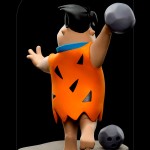 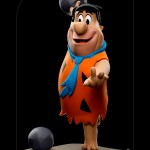 With a smile on his face, he prepares to throw his “rocky” bowling ball, balancing himself on his tiptoes, impressively for his robust size. Ready for his master play in the hobby he loves, Iron Studios present the statue “Fred Flintstone – The Flintstones – Art Scale 1/10”, with the chief of the most famous prehistoric family from the cartoons. Fred Flintstone is the protagonist of the series and patriarch of the family. Wilma’s husband, Pebbles’ father, and Barney Rubble’s best friend. Saying his most famous and iconic catchphrase “Yabba-Dabba-Doo” when he’s excited, Fred is an altruistic good-hearted man, although when he is angry, he shows impulsive, childish, naïve, and cranky behavior. A typical crane operator working in a quarry, he is an expert bowling player and member of the Water Buffaloes brotherhood, and even though he’s talkative, sometimes offensive, and apparently antisocial, Fred constantly seeks ways of improving his and his family’s working-class life, but he also has the talent of always getting into trouble.

Since then, this “Stone Age modern family”, created by the legendary duo William Hanna and Joseph Barbera, was seen in more than 80 countries in the world, being the first animated series nominated to the Emmy Awards for Outstanding Comedy Series and principally, is the series responsible for Hanna-Barbera Production’s transformation in one of the largest studios in Hollywood. Their collection of statues is already available for Pre-Order by Iron Studios to the joy of fans and collectors all over the globe, the line also brings the statues of Barney Rubble, Wilma Flintstone, Betty Rubble, and Dino, Pebbles, and Bamm-Bamm, individually available, revealed on Inside Iron Studios Day. Soon, more news from the Hanna-Barbera universe by Iron Studios in their social media and YouTube channel!