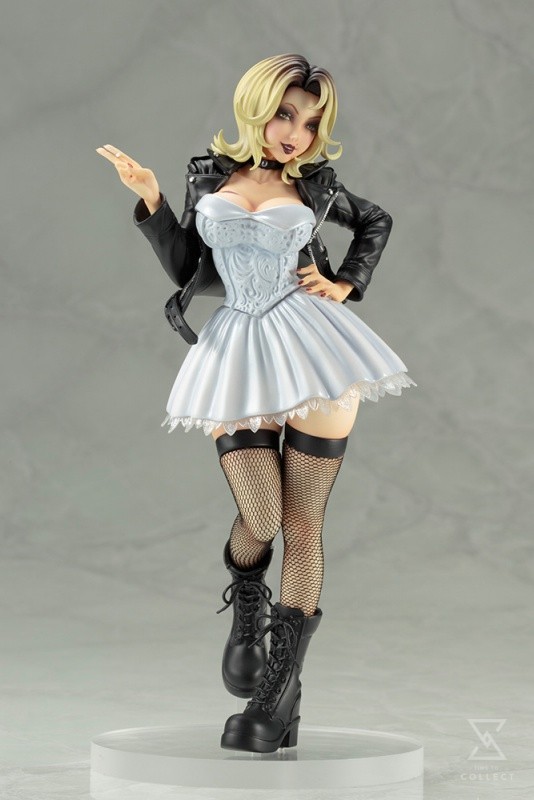 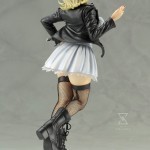 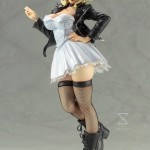 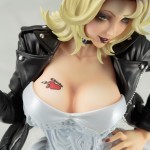 Kotobukiya’s elite Bishoujo Statue line has brought you beautiful characters from all manner of anime series, DC and Marvel comics, Star Wars, video games, and much more. Recently the series took a totally unique turn, transforming horror and fantasy movie icons into pretty girls with Jason, Freddy, Edward Scissorhands, and Chucky. Following up on that last one is another character from the Child’s Play series that was practically born to become a Bishoujo Statue: Tiffany! The original film introduced the killer doll known as Chucky (hosting the soul of the murderer Charles Lee Ray), and in the 1998 third sequel Bride of Chucky Ray’s girlfriend Tiffany first appeared. Just like her lover Tiff was killed and resurrected into a toy, this time a bride doll. But the strange woman’s personality shone through and she updated her look with her favorite gothic style as you can see in this amazing statue based on a new character interpretation by master illustrator Shunya Yamashita! The saucy Tiffany stands with a hand on her hip while the other dangles a cigarette, and she balances on one foot with the other pulled up beneath her. She wears a mix of gothic and bridal with a revealing white dress full of lace and ruffles along with a black leather jacket with matching choker, fishnet stockings, and heavy boots. The living doll’s outfit is fantastically detailed, as is her creamy skin with iconic “Chucky” bleeding heart tattoo on her right breast. Tiffany’s alluring Bishoujo styled face is decorated with dark makeup, and her dyed shoulder-length blonde hair reveals dark roots at the top of her head. Sculpted by Takaboku Busujima (BUSUJIMAX), Tiffany stands over 7 ½ inches tall (1/7 scale) on her specially designed display base. This dark-hearted cutie will look great in your collection standing alone or alongside Chucky!