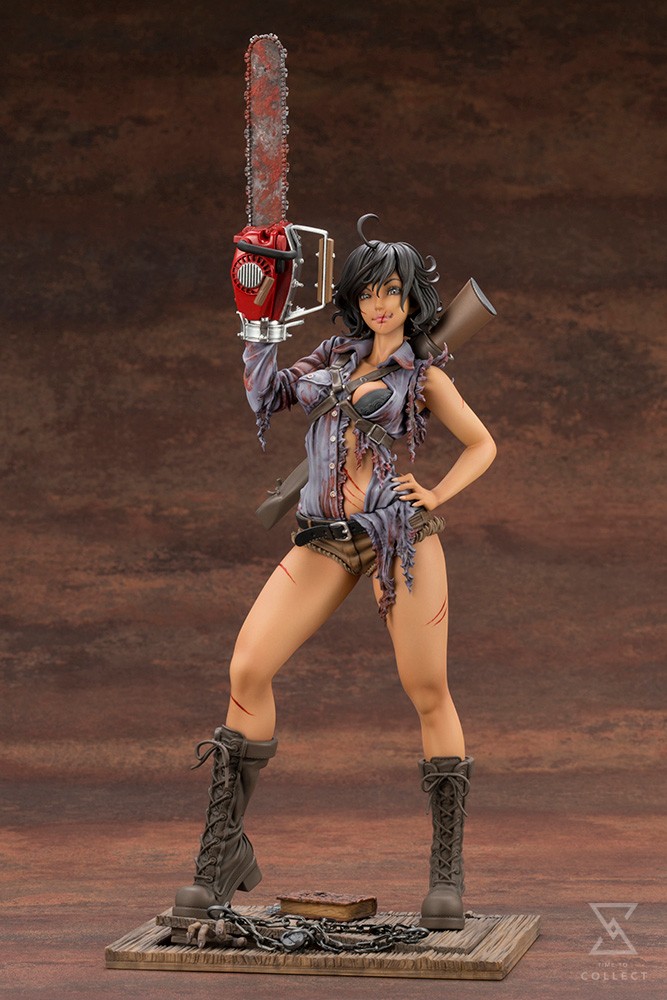 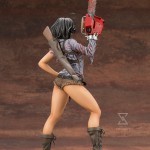 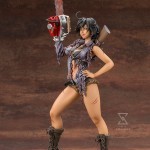 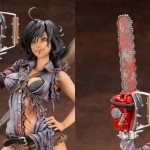 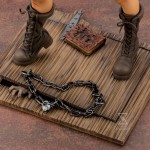 A KOTOBUKIYA Japanese import! Kotobukiya’s elite Bishoujo Statue line has brought you beautiful characters from all manner of anime series, DC and Marvel comics, Star Wars, video games, and much more. Recently the series took a totally unique turn, transforming horror movie icons into pretty girls with Jason Voorhees, Freddy Krueger, and Edward Scissorhands. Up next in this innovative gender-bending series is one of the most iconic characters from one of the most famous cult horror movies of all time, Evil Dead 2: Dead By Dawn Ash Williams! Sam Raimi’s 1987 sequel brought back the indomitable Ash (played by superstar Bruce Campbell), a young man who just wants to have fun in a cabin in the woods but who is forced to put down an ancient evil invading his friends… and his own body parts. Now that reluctant hero’s appearance is expertly translated into the Bishoujo style by series illustrator Shunya Yamashita! Reflecting the violent nature of the film, Ash’s clothes are tattered and torn to reveal her impressive physique as she strikes a saucy pose. She stands on an exquisitely detailed base modeled after the floor of the cabin from the film, complete with a decomposing hand peeking out from the cellar door. The Necronomicon Ex-Mortis, the cause of all the trouble, is a separate piece allowing you to display it wherever you like. Sculpted by Takaboku Busujima (BUSUJIMAX), Ash Williams stands over 10 ½ inches tall (1/7 scale). The contrast between the bold, chainsaw-wielding hero and the intricate details in the craftsmanship make this Bishoujo one you won’t want to miss!