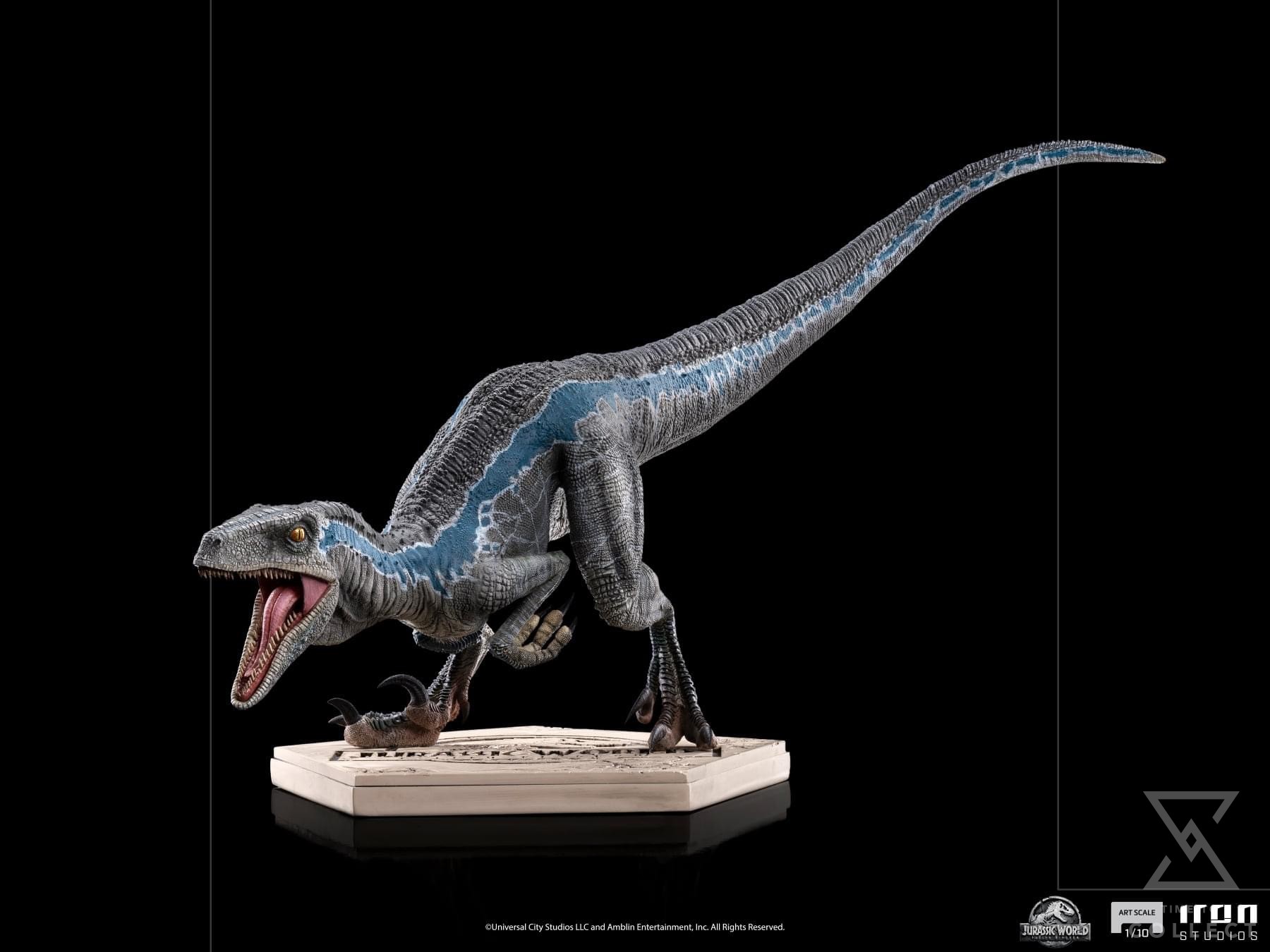 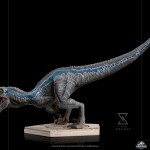 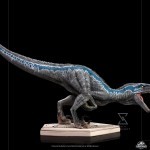 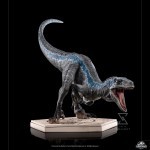 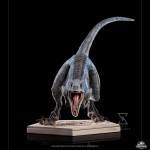 The eldest and only survivor of her pack, and smarter and craftier than all her sisters since she was a hatchling, the female Velociraptor with blue-gray skin, marked with a characteristic blue stripe with a white outline that goes horizontally from her eyeballs to the tip of her tail, as the last one of her species she faces an imminent threat, in the form of an erupting volcano in the abandoned Isla Nublar. Positioned ready to attack, Iron Studios present the statue “Blue – Fallen Kingdom – Art Scale 1/10”, on a pedestal with the movie’s logo, on which the charismatic, and sometimes fierce female Raptor reencounters her old trainer Owen Grady who searches for her in a rescue mission.

Presented in the movie Jurassic World (2015), Blue is known for being stubborn, but very loyal to Owen Grady. Created by InGen for Project IBRIS (Integrated Behavioral Raptor Intelligence Study) to study the Velociraptor’s intelligence, one of the project’s objectives was to use the trained raptors in military operations, something that trainer Owen disagreed with. Her original herd, composed of her sisters Charlie, Delta, and Echo, names that are a reference to the NATO phonetic alphabet system, were trained to follow over 40 commands. After an incident on Isla Nublar caused by the genetic hybrid dinosaur Indominus Rex created by InGen, Blue was the only survivor of her pack and became the only raptor confirmed alive. Presented as one of the most intelligent creatures on the planet, Blue is capable of expressing emotions, like affection, pain, and empathy, something that most of the other dinosaurs in the Jurassic franchise can’t do. Besides the movies, Blue made some special appearances for the Netflix TV series “Camp Cretaceous” in the recently abandoned Isla Nublar.

With many releases derived from the movie “Jurassic Park”, which originated the series, this is the first statue by Iron Studios derived from the second trilogy and the movie “Fallen Kingdom”, expanding the collection for fans and collectors. Revealed on the Inside Iron Studios show on YouTube, check out also the version “Blue Deluxe – Fallen Kingdom – Art Scale 1/10”, on a diorama pedestal representing her nest next to the debris of an Explorer 04 vehicle crushed in the past by a T-Rex, where small Compsognathus dinosaurs made by Iron Studios for the first time merge amidst the vegetation, and the statues “Velociraptor Deluxe – Lost World – Art Scale 1/10” and “Velociraptor – Lost World – Art Scale 1/10”, with the Male Raptor from the second movie from the first Jurassic Park trilogy. All in Pre-Order, individually available, check out more Jurassic news soon by Iron Studios!